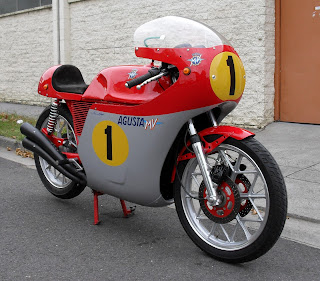 One of my customers bought his little MV 350 in last week for some work in preparation for some display laps at last weekend's Island Classic at Phillip Island. It was such an attention grabber that I took some photos to share. Originally a 1977 350 twin, it has been modified by ex MV GP race team man Primo Felotti into a visual replica of an old multi GP bike. I'm told the process of convincing him to take on the project was almost as involved as the project itself. A classic "I know a bloke who know's a bloke" sort of thing.
Certainly some very nice work in fabricating custom bodywork, and with some engine mods too. The tacho is redlined at 9,000 rpm, but I wasn't keen on going that high myself on the road test. After the road test we pulled the rego plate 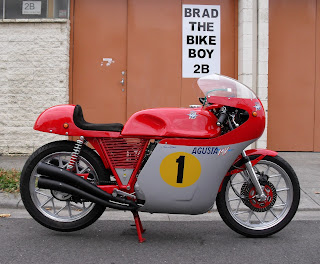 mount and it went to the Island with the classic cafe racer tail piece as it should be.
.
Brad
Posted by Brad The Bike Boy at 5:49 PM