While cruising the Danmoto site one day I came across some Harley mufflers that I really liked the look of.  Plus they were very cheap (at least to buy, the adapting is where the money goes).  Available in a few variations, I chose the ones that I thought would look the best.  I tried to persuade them to make me some pipes to fit them to the Monster headers, as the muffler inlet is 45mm instead of the usual 50mm, but without any luck.  I found a local shop who bent some up, and after a couple of tries I got the angle right.

I haven't got to make any mount plates yet, the mounts welded to the mufflers are the same, but offset meaning one is higher than middle and the other lower in the orientation I've got them, and so will require two different mount plates.  On the Harley I think the mounts go to the bottom.  Dan did offer to take these back and make me a set with the mounts welded to the mufflers where ever I wanted them, but I haven't got that far yet.

Maybe they're a bit skinny for the Monster, but they'd probably look a lot better without the std footrest mounts.  Running them at the same angle as the lower footrest bar as shown below (about 30 degrees from horizontal) has them a fair way below the bracket.  The bottom of the plastic side cover is 40 degrees, and they look a little better at that angle.  Who knows where they'll end up. 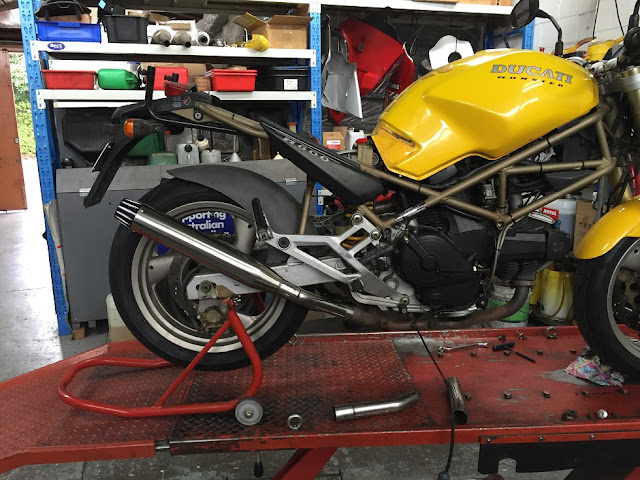 Posted by Brad The Bike Boy at 4:44 AM No comments:

I rode Minnie out to see Rob at Guzzi Spares the other day.  I figured the 35 or so km to Cranbourne would be a good shakedown (if indeed shaking was required) and otherwise close enough to good help at either end to be safe.  I hadn't been to see Rob's new workshop before, and, feeling like a slack friend, took the chance when I had it.

However, she has been running very well.  I  currently don't have a tacho fitted, but there seems to be a bit of a harsher patch around 4,500 rpm I'm guessing.  Either side of that and it's good.

I did check the idle mixture again after the ride.  She's done 100km now since the recommission, and I had put some of the Wurth fuel system cleaner (it's really good gear) in the tank to see if there was anything in the carbs from the 4 or 5 years of sitting on the shelf.  When I first got her running the screws were either side of 4 turns out for 5 ish % CO.  Now they're back to either side of 2 turns out, where I'd expect them to be for a 400.  She still starts and revs from cold without choke, which seems a bit unrealistic to me.  But I did go through the carbs (original M600 from 1997, which are the same as the 400 from 99 onwards) and all jetting is spec.

The gearing is still making me laugh, but it has also given me a bit more perspective on ratio spread.  Maybe it's just the little engine thing amplifying stuff too.  Parts of the freeway that used to be gentle rises are now hills.  And, once climbed, the speed increase on the downhill is really noticeable.

The table below shows the gearing, compared to the other boxes.  First is very short, and the smallest gap between gears is 13% - the very noticeable difference between 5th and 6th.  I was thinking of modifying the "800" box I have (actually out of a 696) with a change to one of the 6th gears to make it 11 or 12% gap from 5th as opposed to the 8% it is std, but now I'm not so sure it'd be such a good idea.  Then again, the 900 wide ratio box is 12% 5th to 6th and it feels just fine, so maybe all I need is some more cubes.

Posted by Brad The Bike Boy at 3:37 AM No comments: 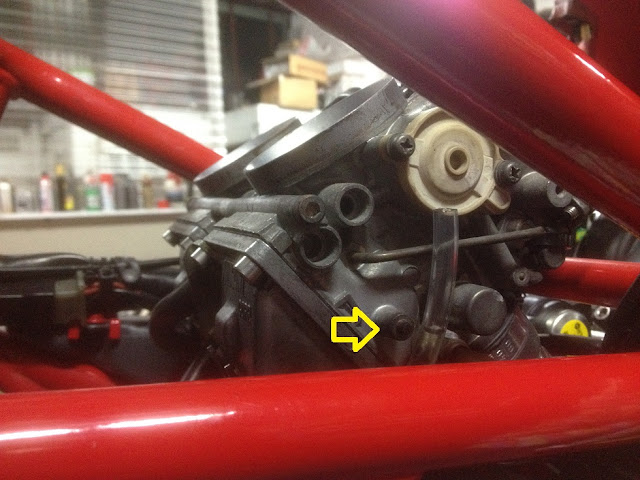