.
Mick, a previous Moto One employee, bought his 1000SS in today so he could have a bit of a play with it in more equipped surroundings. Plan was to do fork spring and tyres. That plan stalled when he decided to do the belts given they were over two years old and in the process found the vertical cam very hard to turn with the belt off.

So after a bit of a nervous laugh and then the recognition of a potentially much more serious issue he got stuck in, pulling the opening rockers so we could spin the cam fully. This showed that it wasn't a closing rocker dragging, so it was looking much more like cam dragging in head. Nasty. But after we removed the pulley all was revealed and there was a big sigh of relief.

What had happened was that the screws behind the pulley that hold the pulley surround (cast alloy on these engines, rubber on the older 2V motors) to the head had come loose, with one screwing itself out and rubbing on the back of the pulley. Once spotted we could see that this was visually obvious. On the horizontal head the screws were clearly tight, being at the bottom of their recess. You can't get a tool on them without removing the pulley, and the engine wasn't noisy so there wasn't any outward sign of the problem.

So something else to be wary of. You can see the chatter marks on the back of the pulley in the photo below. We're not really sure of the long term potential for damage, but it's not an ideal thing to have happening by any means.
. 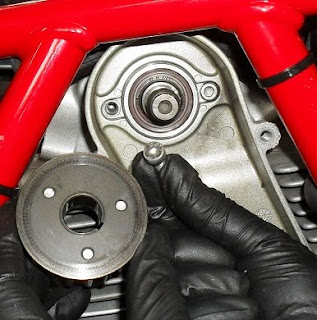 Posted by Brad The Bike Boy at 7:00 AM No comments:

.
Staintune are having another clearance sale. I can't find a web page for the sale this time, so will run the list of usual makes here. There is a full page ad in this months Cycle Torque for all makes. Anything with twins mufflers is $500 ($1300), single muffler $300 ($700). Good savings to be sure.

.
I have an order in for 5 of the large Hyper tanks - http://www.ca-cycleworks.com/ca-cycleworks-6-4-gallon-hypermotard-fuel-tank - due in around 4 weeks. At this point of time all tanks ordered will be black. If anyone desires one of the other colours (white, natural, red) please let me know and I can order as required. Retail price will be finalised once they arrive and all freight and customs costs have been paid, but we're hoping for $990 inc gst. A deposit will be required for any non blacks. Trade enquiries welcome too. 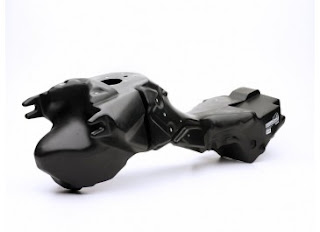