Photo from the Festival Of Italian Motorcycles

.
Rob Labuc took a few photos of my little display at the Festival Of Italian Motorcycles. It was a good day overall. I spent all, but about 10 minutes standing under the (successfully deployed) pergola talking. Rob manned the stand while I had a quick wander around to see what was about.

I did get to have a look at the bike that won my award, Markus's 851SP3. I've known Markus virtually for some time on the 851-888 forum, but had never met him in real life. It's a very nice SP3 too, apart from those god awful bloody blue Samco radiator hoses. Really can't stand them.

My 851 had a nice trailer ride and looked very nice too. I was surprised how good it looked with just a wipe over. For a little while there was a very nice little Bultaco Metralla next to it. A bit of a ring in (woka woka woka) perhaps, but some lovely retro none the less. 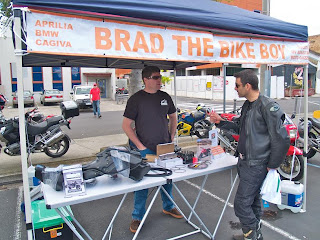