One of the motors I have in bits is a 600SS motor, which came from the bike I sold the original engine from Minnie into.  I actually sold more of this engine last week, just to make it harder for me to pointlessly waste a heap of money rebuilding it.  This was mostly due to a mock up of the bits I had done the week before, trying the 68 mm stroke 900SS crank (a narrow one) to see what happened.

There was contact in a couple of places between the crank webs and the cases, at the inside of the starter drive idler gear boss in the LH case, and in a similar position on the RH, with a casting ridge that I'm guessing would be for an oil gallery.  So I can't really cut either out, meaning the crank would have to be relieved at the outer edge, which reduces the most significant section of balance weight (furthest from the centreline). 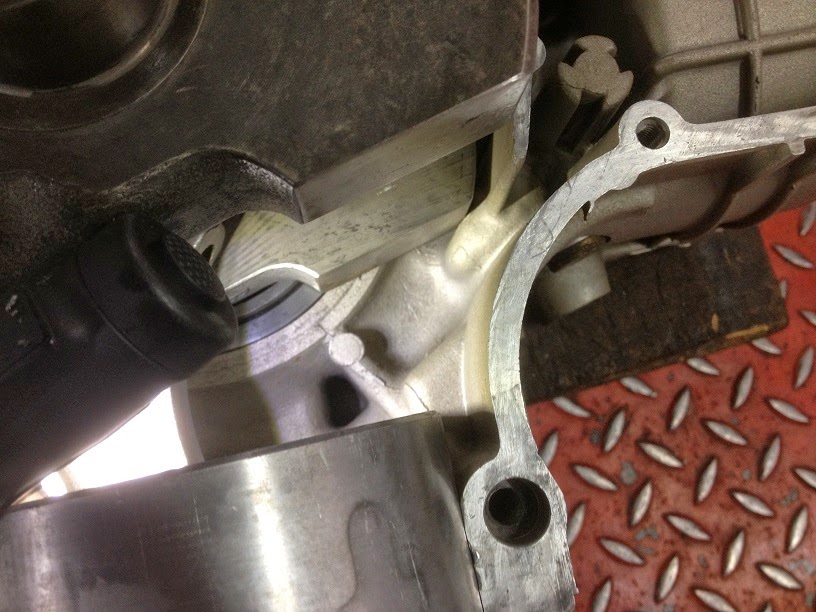 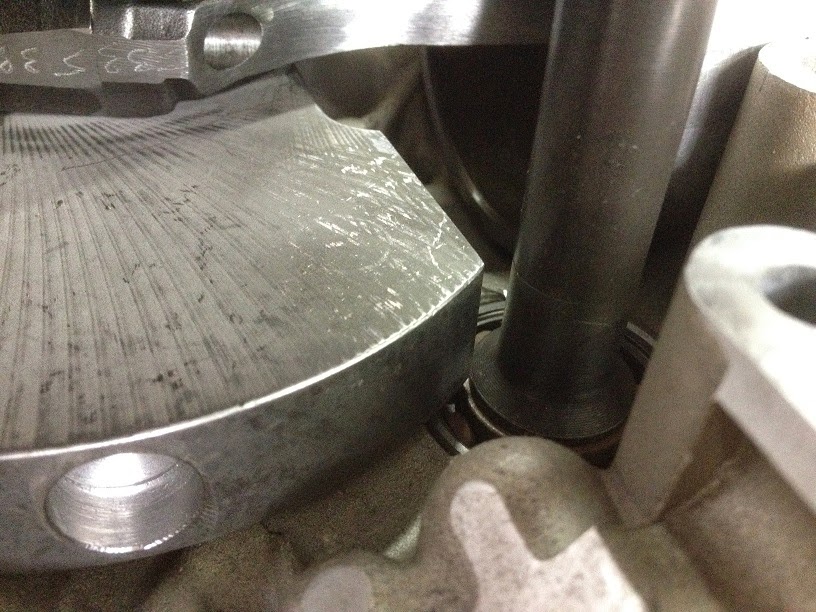 The bottom of the 600 cylinder did just clear the web, with the underside of the piston quite a distance away.  And the rods cleared the timing shaft. 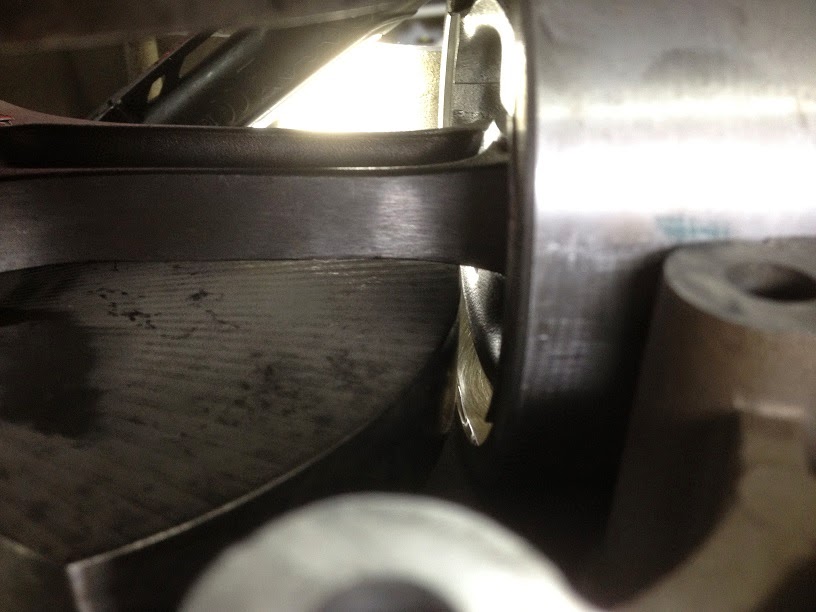 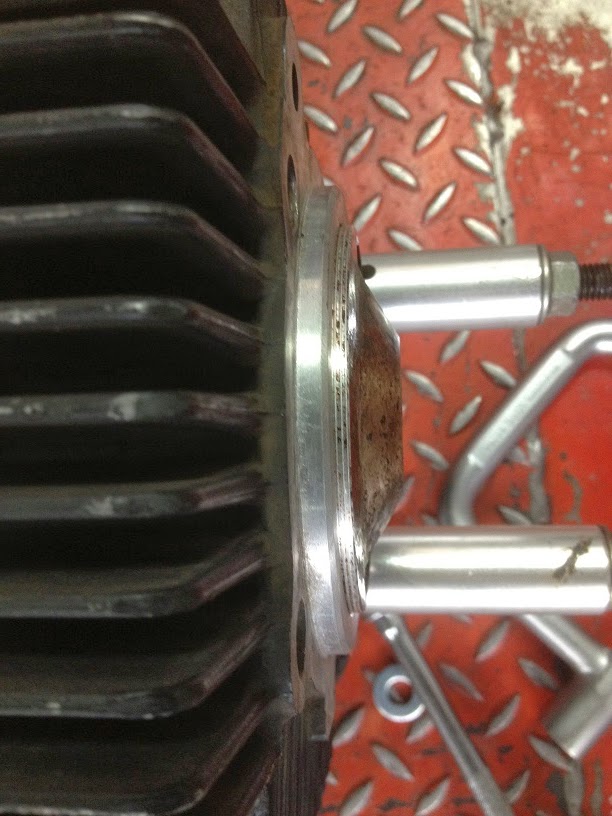 Anyway, I digress.  The point of this was trying to put a late model small block 6 speed into pre 98 cases.  The complete 6 speed box I bought from Ebay was from an M696.  The easiest way to show why it wont drop in is with some photos.

Input shaft:
The input shaft has a larger nut on the clutch end, like all other late model boxes.  So you'd need a bigger nut and possibly to do something to the clutch hub to accommodate it.  The length of the clutch snout looks to be the same from threaded end to first gear.  I didn't notice any difference there, but I didn't measure them.  I might do that.  6 speed at the top. 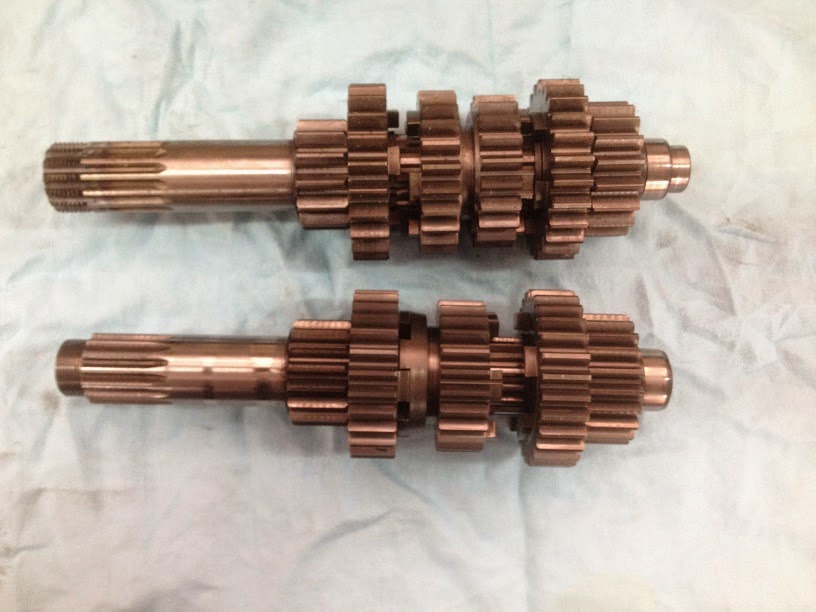 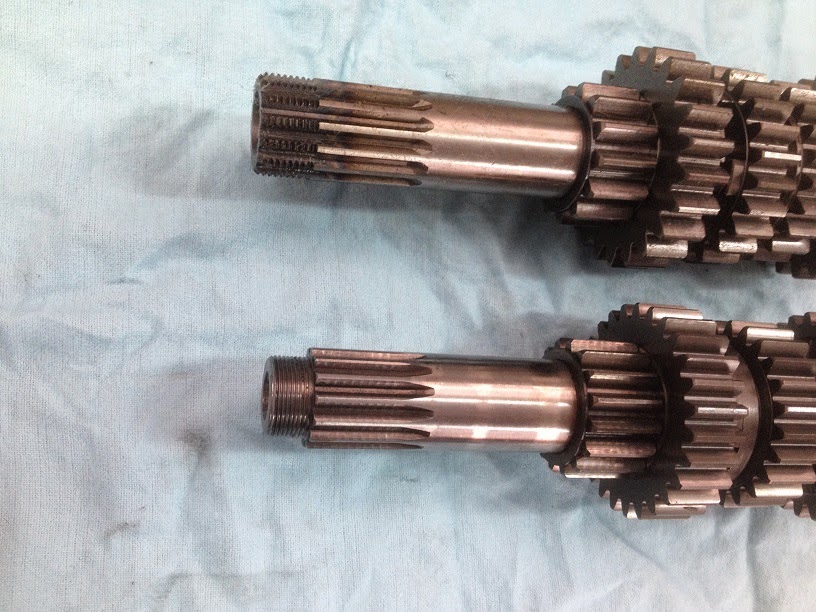 The LH end of the input shaft has an extension that goes through into the recess which the clutch pushrod passes through.  As the pre 98 doesn't have the clutch pushrod passing from left to right, there's no need for the extra snout, and no room in the LH case for it anyway.  It has to be removed, and I figured the drop saw would take care of that. 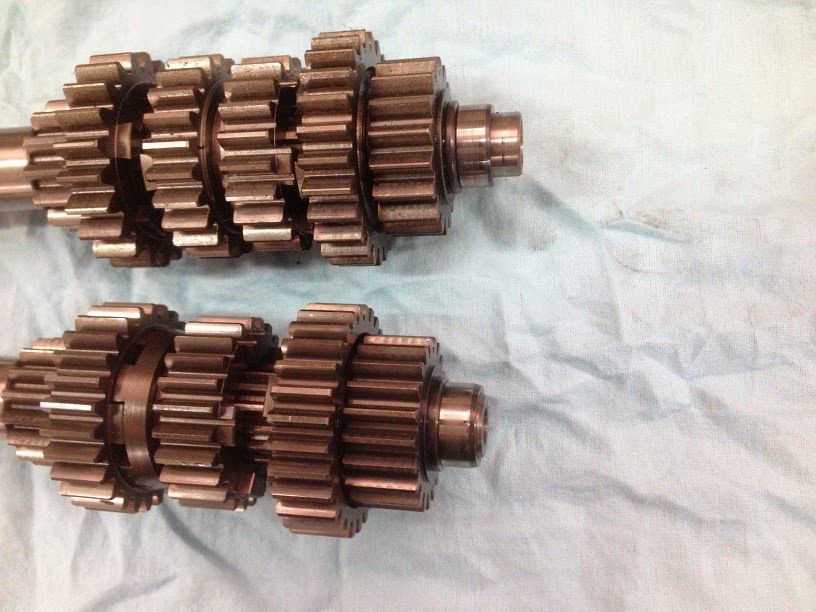 Output shaft:
Not a great deal of difference here.  The shaft outside of the LH bearing is 10 mm longer on the 6 speed, but you'd just turn the sprocket around to fix that.  The only other thing I noticed is that, while both shafts are 25 mm diameter at the sprocket spline, the 6 speed wouldn't slide into my 600 cases like the 5 speed did.  Maybe it just didn't want to be there. 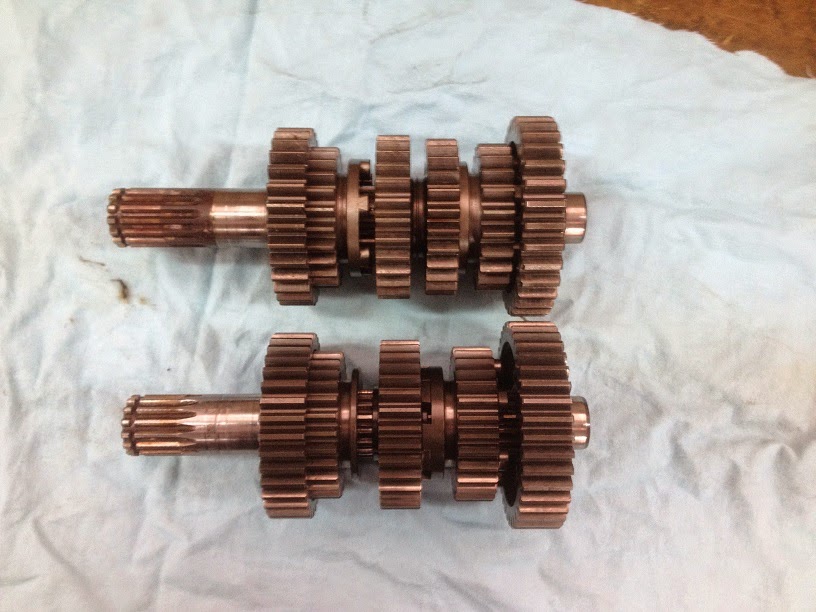 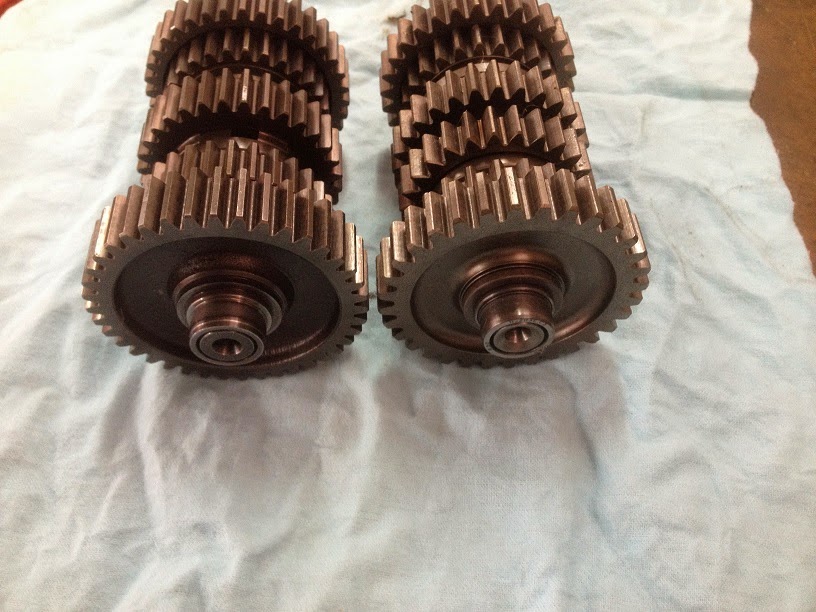 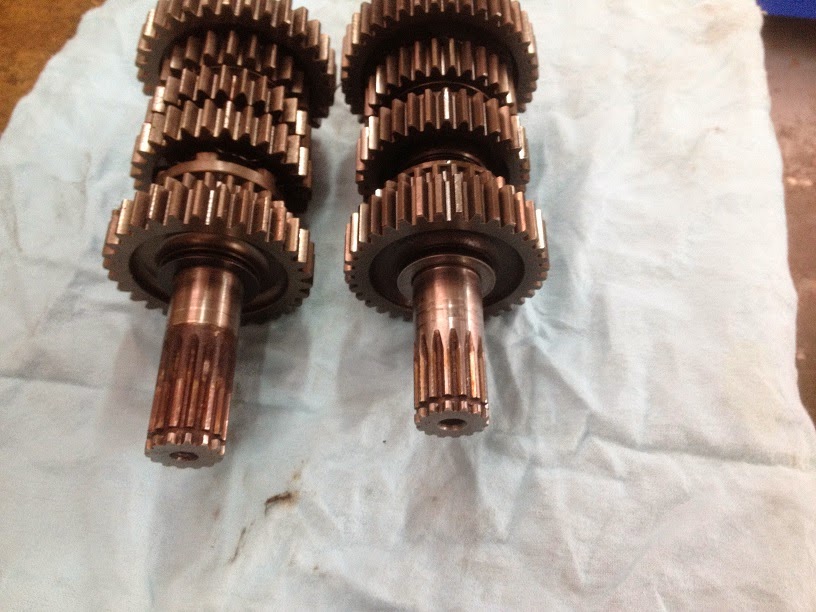 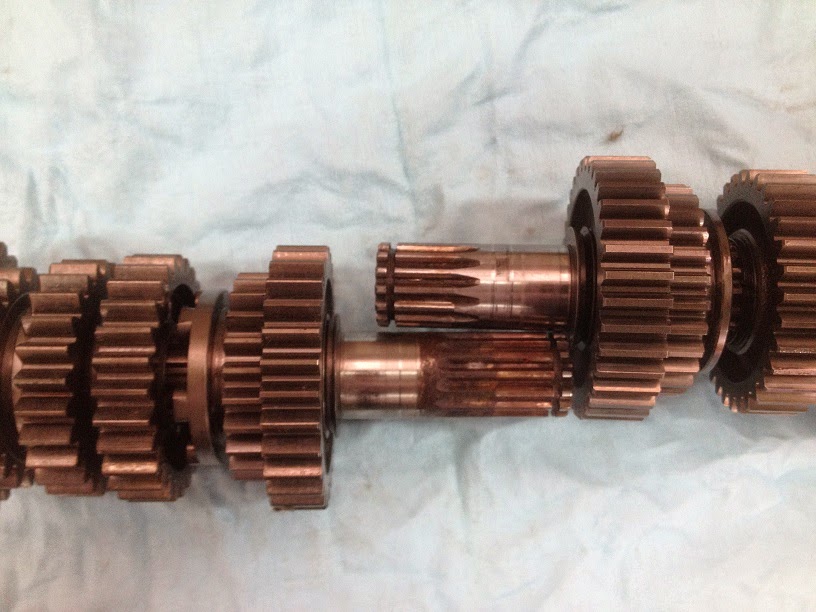 Shift drum:
The shift drum is the biggest issue, with quite significant differences. 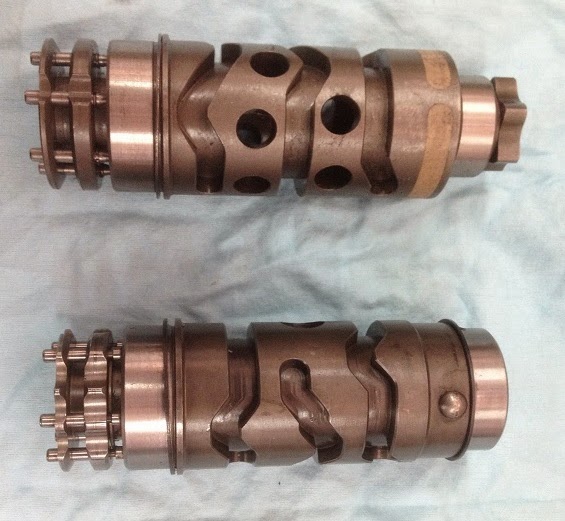 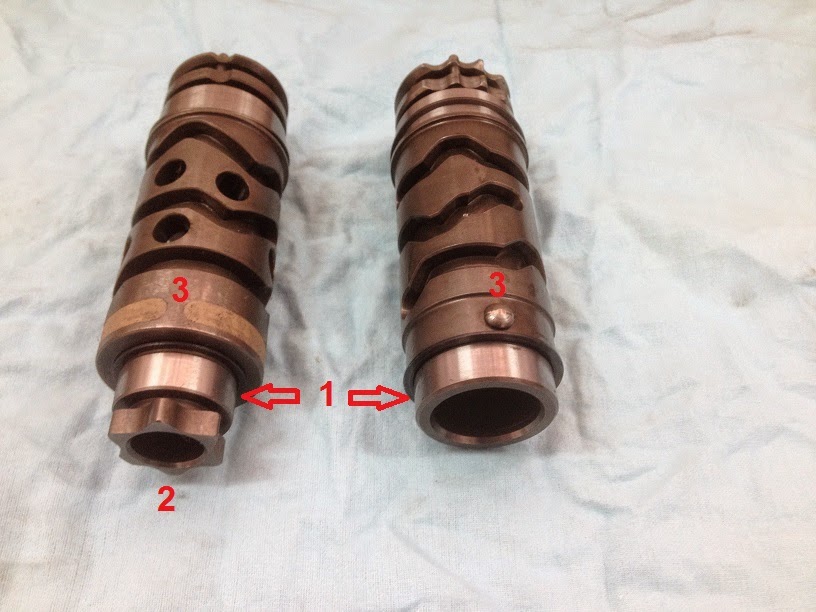 The RH bearing area is much smaller diameter on the 6 speed (1 arrowed).

The RH end of the 6 speed drum has the 6 groove snout (2) for the sprung detente lever the later bikes use.  You can see at the bottom left of the snout that one ridge is missing its top, that's neutral.  The sprung detente lever at the RH end of the shift drum was introduced with the 916 from memory, and every new model since has adopted it.  The sprung ball detente at the LH end of the shift drum is now only for neutral, so there is only one corresponding groove in the LH end.


The neutral light activation has gone from a 2 wire switch that is pushed in by the lump on the 5 speed drum (3) to a single wire switch that is earthed by the drum itself.  The light brown covering on the drum, with the space at the (3), is an insulating coating that keeps the earth circuit open at all times except for when the drum is in the neutral position.

The difference in the shift fork groove pattern is obvious, so clearly you can't use a 5 speed drum.

I had various thoughts for overcoming these issues, from cutting and shutting the end of the 5 speed drum onto the 6 speed drum to making a spacer ring and welding on a switch pushing lump and cutting off the detent snout with the drop saw.  Attempting the shut once the cuts were made is the only way you would be able to determine if that was a viable option.  If not, you have two scrap shift drums.


But you still have the issue of the LH end to deal with.  The LH end of the 5 speed shift drum shows the old style detente grooves.  You would have to machine these into the 6 speed shift drum to use it, which for me starts to make the whole thing much more of a hassle as I don't have a mill.  One option around this is to use a non RH snout detente style shift drum from a pre 916 big block as a starting point, ie, 851, 888, 900.  I'm sure I have one of these around somewhere.  I did compare a 900ie shift drum, which does have the RH snout detente, and the grooves appeared to be functionally the same.  They weren't as smooth flowing, with a step at each transition point, but all appeared to do the same thing at the same setting. 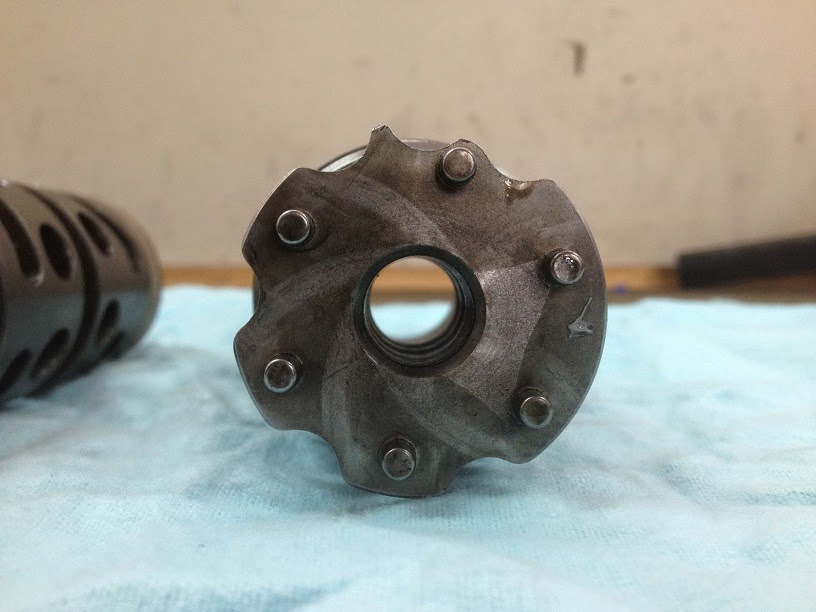 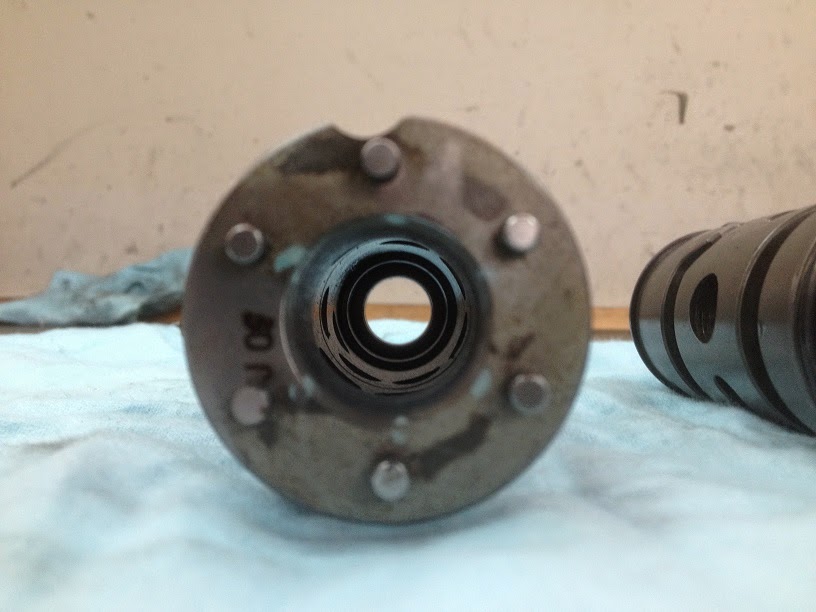 So I didn't get any further with this fitment.

The other issue I have with the concept is that while a 6 speed is nice, the niceness comes from the ratio spread.  The 5 speed ratio spread is 2.59, the 6 speed is 2.67.  The big block wide ratio 6 speed is 2.88, a comparatively much bigger change.  To overcome this there is the possibility of having another gear made for 6th, either 1 tooth bigger on the input or 1 tooth smaller on the output.  The 26/24 ratio gives an 8% gap between 5th and 6th.  27/24 gives an 11% gap, 26/23 12%, with a ratio spread of 2.78.  That makes about a 3 tooth on the rear difference between the top gear ratio of the 5 and 6 speeds.  The shape of the current teeth determines if the 1 tooth idea will fly.  The input shaft gear will be the easiest to make, as the output shaft gear has a shift fork groove on it.
.
Posted by Brad The Bike Boy at 2:19 AM