Minnie the 400 Monster: Muffler comparison test with the 2 -1 header (ie, why is it so bad)

I had the feeling that the Danmoto muffler I had modified for Minnie to go with my 2 -1 header set was the cause of the poor top end.  Getting back to the dyno with a Megacycle muffler fitted proved to be a bit of an organisational nightmare, but I finally got there. 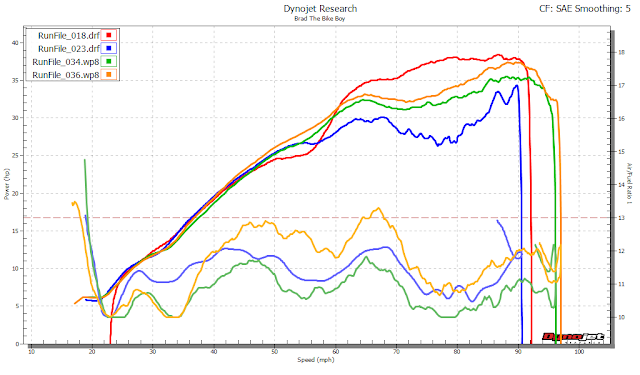 All of which means it dyno'd like it felt with the Megacycle muffler - better, and pulled through the top end nicer.  Still down on power though.

An aside here is that when the bike was running the std 2 - 2 header set I didn't have a tacho fitted, and I'm sure I never went over 7,000 rpm.  So that big jump in the std header curve, which happens at around 7,200 rpm, I may never have felt.

I took a std muffler with me for these dyno runs, and some Kokusan ignition units to replace the Ignitech.  I have had intermittant cylinder dropping at idle when hot with this bike for years, across 2 engines now so I know it's not engine related.  I thought I had swapped the Ignitech out without success in the past, but I must say that the issue has not reappeared with these Kokusan units fitted in the couple of times I have ridden Minnie since.  To be fair to the Ignitech, it is the unit I originally bought back in 2006 or so.  It's had a good run, and the new version has a dedicated MAP sensor input which works much better than trying to mimic a TPS with a map sensor.  Maybe I just needed a reason to not feel bad about updating it.


Std muffler in blue, Danmoto in red and Megacycle in yellow.  The air/fuel is a bit unexpected in as much as the red line seems a bit lean, but it may be a physically different sensor (I had two to choose from).  Also you can see that an open muffler leans it out.  I had thought that maybe these carbs would richen up with an open muffler due to the way CV carbs work, but I'm still not convinced this was a good test.  Danmoto is still better than std!  For an illustration of the hollowness of that victory, see the following graph. 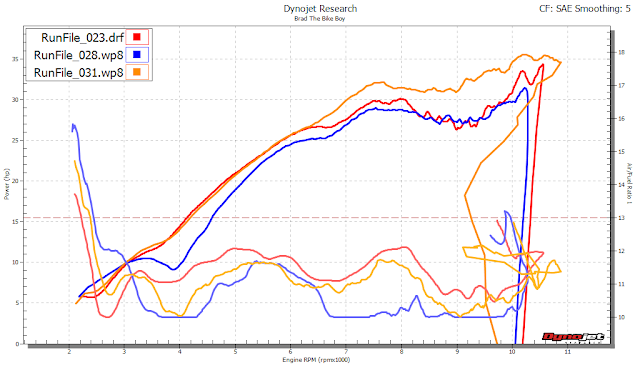 As from the previous graph, blue is 2 - 1 header with std muffler, red is 2-1 header with Danmoto muffler and green is way back when with std 2 - 2 headers and std mufflers (all with 108 cam timing).  Yay!  The line for a shot to the pills starts behind me. 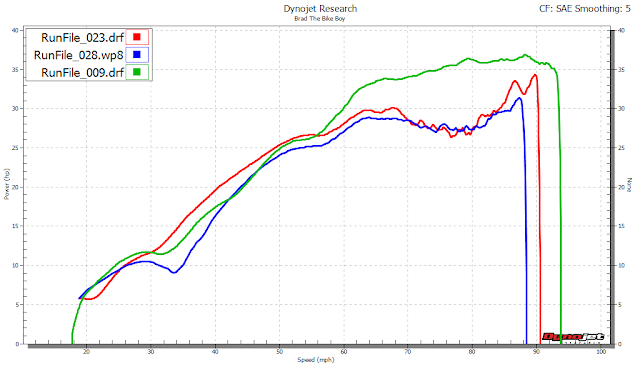 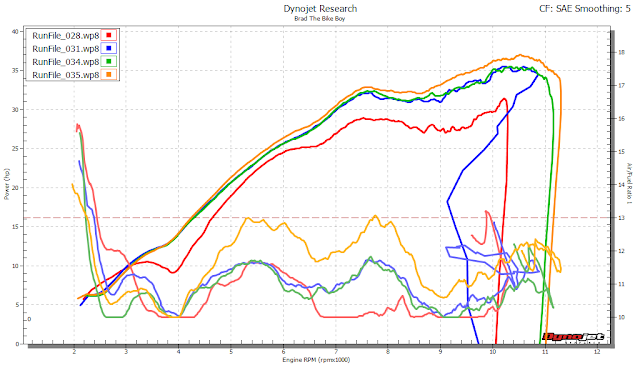 Comparing headers only (std versus my 2 - 1), first up std mufflers. 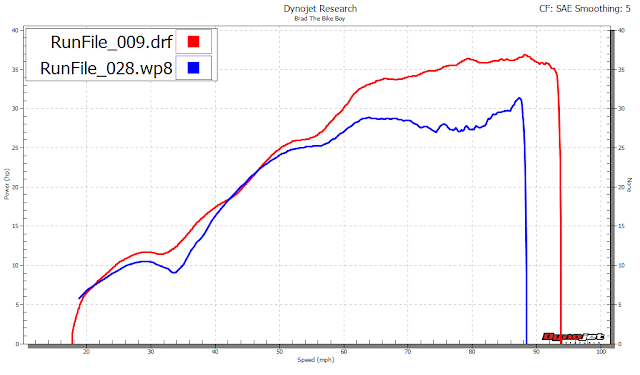 And the Megacycle mufflers.  The point where the two curves cross is bang on 7,000 rpm. 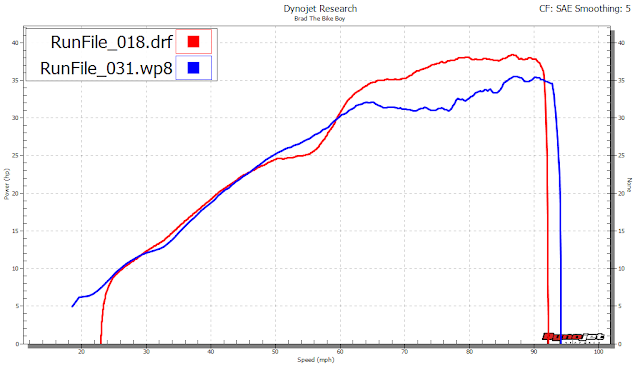 So, some conclusions of sorts.1/  The Danmoto muffler I really like doesn't work.
2/  The 2-1 header I made doesn't work.
3/  It's too rich at the top end.  From my test of watching the slides lift through the airbox lid I think i'll call it a main jet issue.  If pulling the other snorkel fixed that without hurting the midrange I'd be all over it, but as that wishful plan didn't pan out I'll ignore it for as long as I can't be arsed pulling the airbox out.
4/  Original headers don't work anymore due to the lack of muffler mounts due to the Ducabike rearsets. And the vertical header has been shortened, so any main header will need to be cut, bent and welded as this 2 - 1 header was for them to join.  I did find another original vertical header at work, so I could fit that.