Fitting Out The Factory 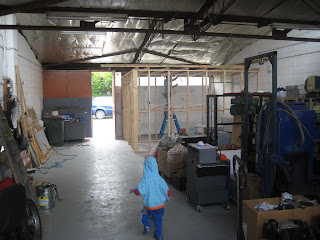 .
My cousing Alister came down yesterday for a fun day of office framing - a little work for him on his holiday - and Ivan the electrician was in this morning running a few wires so we can now plaster and paint the office and have it looking more like a going concern. All I need now are the benches and shelving and stuff out of boxes and completing the seemingly endless list of other things to do.
.
The photo shows the current state of play - a small factory in Oakleigh half full of (hopefully) most of the stuff you need for a motorbike workshop with things being moved around to give access to whatever it is we're trying to do on the day. With Ivan the electrician up a ladder and Finn chasing his Thomas The Tank Engine ball.
.
At this point of time I hope to be up and running around Monday the 19th of January, later than I'd hoped, but I'm not sure how quickly my shit will be getting itself together over the next couple of weeks. And with the exception of the dyno - it will happen at some point in the future, but it's not top priority right now.
.
However, in the short term at least, I'll be taking on fairly simple stuff just because it appears to be a bad time of year to be trying to find unusual parts and get sensible answers out of suppliers, both here and overseas. And I have to get a feel for doing it all myself - it'll definitely be different to the previous 17 years.
.
And I have to fix Minne too - the last time I rode her she failed to proceed several times on a very hot day. She came good with a full tank of fuel so I'm guessing it's vacuum fuel tap or fuel pump. Interestingly it'll be the first time I've experienced issues with either - just like the ignition coil that died many years ago now was the only 2V coil I can recall seeing fail.
.
Posted by Brad The Bike Boy at 7:49 PM