I had the feeling 20mm of preload was too much, which turned out to be correct. With the preload adjusters wound all the way out it only had 30mm of sag with his 95 odd kg on board. So 10mm of preload would have allowed the full use of the adjusters I would assume. Peter from Promecha told me once that 15mm of preload is generally pretty good as a very general rule, and I'd have to say that's advice to be taken.

There were a couple of surprises along the way. The first was the condition of the steering head bearings. With only 7,500km on the speedo some would expect no issues there, but the centering notchiness was enough to make me point and laugh and Mick replace them. Luckily I keep them on the shelf, and the almost greaseless originals were gone in short time.

The second surprise was the forks themselves. First some background - there are two styles of Showa adjustable forks used on Ducatis, or so I thought.

The first style is the 41mm fork initially fitted to the 1991 851. These have a 50mm top OD section (where the top clamp sits) and a 54mm lower OD section (at the lower triple). Fitted to the 851, 888, 900SS and 900M Special, they became 43mm around the same time as the brake calipers went to 65mm mounting pattern, but the outer tube dimensions remained the same. As 43mm they were fitted to the 900SSie, 900Mie, 1000SS, 1000Mie, ST2, ST3, ST4, ST4S, S2R, S4 and S4R. Some had gold TiN sliders for looks, but were otherwise the same internally. Or so I thought. The main internal feature of these forks is that the rebound adjuster, in the top of the fork cap, has the needle valve at the cap. So the oil in the rebound bypass circuit has to flow the full length of the fork cartridge rod to escape. I'm not sure if this is the sole reason for their crappiness, but it does lead to less than desirable action. Not that they are bad forks, and they can be made quite acceptable and certainly better than std with revalving and respringing - as typical of Ducati Showa forks they have too much high speed compression damping among other things. But even with help they have some designed in issues.

Which brings us to the second style, introduced with the 916 in 1994. These 43mm diameter forks are 53mm OD through both top and bottom triple clamps, and their main internal feature is that when you remove the fork cap, it comes out with a long rod attached to it. The rod is about 600mm long from memory - it definitely stands out compared to style 1 above. This rod is again the rebound adjuster valve, but instead of working at the top of the fork, it works at the cartridge, right were the action is happening. The Showa forks fitted to the Aprilia models I have had apart are all this style too (from memory anyway, RS250, RSV Tuono and Falco).

As far as I knew, there are no 50/54mm OD forks with the long rod rebound valve. But when we pulled Mick's forks apart, they had the long rod rebound valve. This bike is a 2006 model, but the same # fork is used in all 1000SS according to Softway, so I'm a bit confused now. I don't recall what any other late model 50/54 Showa have been like when I've had them apart, but I'm sure I've never seen a long rebound valve in any ST4S or S4R forks. The photo below shows the rod I'm talking about, stolen from a post on the Monster Forum from memory as posted by a Swedish fellow who emails me regularly named Torbjorn. He and his mate Thomas with the grenading 888/1026 amongst many others are quite the source of amusement. They have a very cool looking orange 900SSie "rain bike" that is nominally to be used at wet track days. Although it mainly gets used because everything else they or their friends own is failing to proceed. It's by far the most reliable thing they own. The unkind (sarcastic?) would say that's because they tend not to play with it. I think there's a little lesson in there for us all. 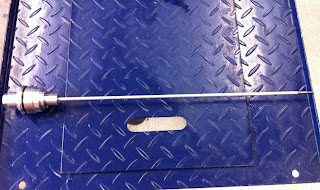 Regardless of fork style, as a general rule all the non Superbike forks (Showa and Marzocchi) are sprung way too soft for most people (80 - 95kg) and the Superbike forks are sprung a bit too hard. Most of the SS, M and ST series have a progressive or two stage sort of spring that gives lots of sag with the soft initial section, but then gets very hard and harsh towards the end of the travel. Combined with the high oil levels (usually 90mm or so) and inbuilt excessive high speed compression damping of the Showa they can make for a fairly unpleasant front end.

Anyway, with the 0.95 springs and 2.5 weight oil Mick set off for his hour and a half or so ride home. He had also finally given in to fitting a 14 tooth front sprocket, which takes the gearing from 15/38 to 14/38, much closer to the 15/42 I like so much on these bikes. Mick is a country rider, so low speed city commuting is not something he experiences. But I still like the shorter gearing regardless, and a 14 tooth front sprocket is cheaper than a larger rear and new (longer) chain.

He texted me later that night with the following: "Amazing, a totally different bike, no more harsh crashing over bumps, great control thru bumpy corners, found myself searching for bumps, I never thought it could feel this good."

And finsihed with "14 tooth sprocket is the go for sure." Yes, it is. That's why I suggested it.

Generally suspension mods are something that most owners resist like the plague. But, once they have given in to this non visual expense (I think that's a real issue, you can't see the bits they've paid a lot for) and experienced the difference they act like your typical born again christian or reformed smoker and start preaching the benefits to all (although those who have seen the light of lightweight wheels are generally worse). It really can make that much difference.

As our happy Mick is now no doubt telling all his riding mates.
.
Posted by Brad The Bike Boy at 3:52 AM

Well there you go. Wonder why they did it in the SS and seemingly no others.