.
I finally got around to fitting the other Danmoto Jisu muffler to Minnie and gave them a run on the dyno.  The LH one sat out just enough from the swingarm, but although the RH could be fitted with a little clearance, by the time I got to the dyno it was rubbing. 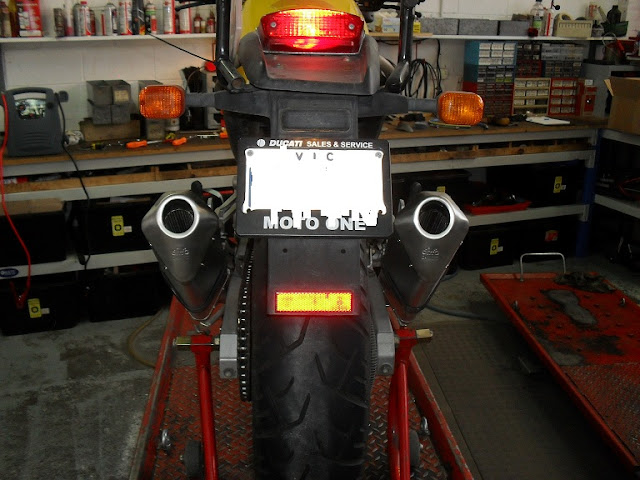 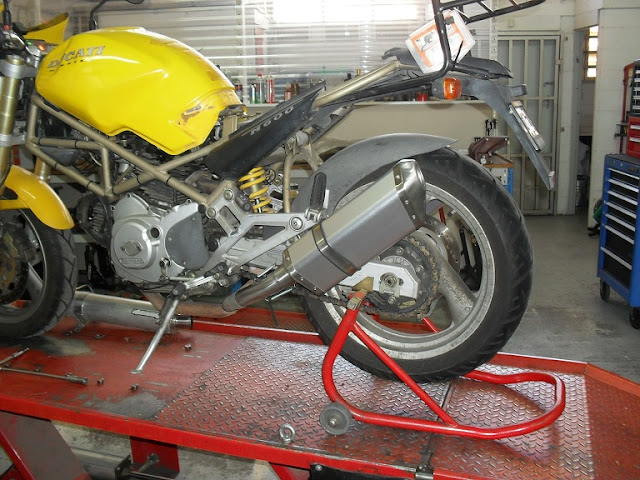 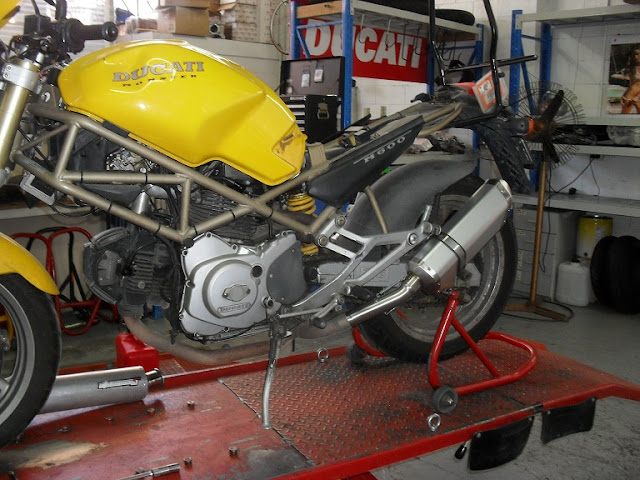 Photos of the other side fitted some months ago here: http://bradthebikeboy.blogspot.com.au/2012/04/danmoto-jisu-mufflers-on-minnie-600m.html

The sound was a little different to the Megacycles I think, but I can't really remember how.  I took some video in the dyno room of the two to see how they compared, and to watch for exiting packing from the Danmotos as others have said they do on a dyno run.  Danmoto actually include instructions about (not) dynoing their mufflers, in particuar the carbon ones.  But these ones are nice and strong so I couldn't see there being much of an issue.

I shot some video of the sound, although I'm not sure if my position in the room was good or not.  I figured being in front of the mufflers might have made the sound less harsh (for the crappy camera), but in reality I have no idea of what they actually sound like on the dyno due to the ear muffs I've always got on.  So I'm not sure if I can really hear a difference.  Danmotos first, then the ever trusty Megacycles.

As for power comparisons, the Danmotos were going in to this fight on a hiding to nothing, as the Megacycles are about the best performing mufflers I've ever come across.  Particularly bottom end. Which made the news Dave gave me about Ken shutting down Megacycle rather sad.  10 years ago Melbourne had 3 places to go for custom exhausts: Madaz, Megacycle and Moorabbin Motorcyce Engineering.  Now they're all gone.  I don't know of anyone else doing it now, but there's obviously people who'd do Harley stuff at least.

Red is Megacycle, blue Danmoto.  Not too much in it really.

It does also appear that the Megacycles, while making more power, are giving a richer mixture.  This is consistant with my theory that a better muffler downstream of a CV carb makes them run richer if the upstream inlet side is unchanged.  I'd like to do some runs with the mixture sampled out of the header ports for std and aftermarket muffers to get some hard data though before I go saying it too loud.

One other run I did was a no change run after letting the bike sit for 15 minutes.  I have often seen results that to me have more to do with the nature of dyno testing than changes made.  I have many sequences of runs where we'll do some WOT runs, then all the part throttle runs and finish with the same run as we started with.  Often the power will pick up 1 to 3Hp, even though there's no change in mixture.  I'm not sure if it's a tyre thing or a dyno room thing or just a hot engine that has soaked then cooled a bit.  Original run is in red, 15 minutes later is blue.  The change in mixture (leaner) surprises me, but apart from heat soak of the carbs I don't have an explanation for it.  I'm not sure of the impact of fuel temperature on power levels or mixture as delivered by a carburettor.