The Island Classic and Ago

.
I went down to the Island Classic for the Saturday to fiddle as required with the MV Agusta Julian McLean had built by Albert Bold, which was doing demo laps ridden by Ago.

Julian is the man from Tahbilk Winery who has been a driving force behind the MV Agusta presence at any motorcycle related function in Victoria for the last 12 or so years.  An passionate enthusiast of the type small volume importer's dream about, he also puts his money where his mouth is.  Hence the bike built by Albert.  It's a Magni frame with a 600 engine taken out to 887cc, dry clutch and chain drive conversions and original MV race team plasma sprayed aluminium front discs.  Albert is a very high end machinist, and the titanium throttle linkages, for example, are just a work of art.  The bike was featured in the December issue of Motorcycle Trader (Au).  100hp with the megaphones and 155kg.  It's a pretty impressive piece of old kit just in itself.  Here's a link to Albert's previous MV race bike

Ago turned up in a Fiat 500 with a local lady named Rosa and from the moment he arrived was swamped.  He did a couple of sessions both days and the bike went well enough that only a gear lever adjustment was required.

So, to some photos and video.

Julian firing it for the first time on Saturday morning I believe.  Rosa in the background and me being the only one smart enough to put their fingers in their ears.  Of course, Julian has earplugs.  It is godawfully loud.  Albert made a 4-1 exhaust for it as well, which made an extra 15hp.  Just not old school cool. 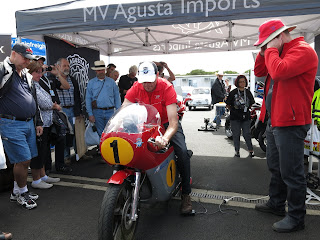 I like this photo.  Ago in ungracious pose fiddling with boot, me watching on for no apparant reason, photographer extraordinaire Phil Aynsley with the big camera and high vis, Tony Hannagan from Beveltech (Phil's pack horse for the weekend) with little camera and high vis, unknown paramedic.  Note to self, pack high vis for next time. 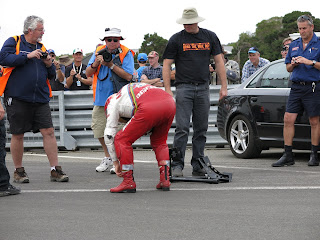 Julian warming it up for Ago, smile hiding the paranoia of hoping like hell nothing goes wrong. 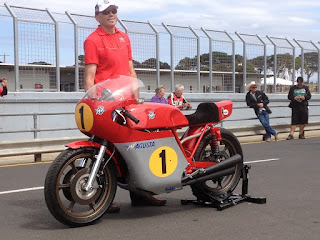 A very short video of Ago down the front straight.  First movie with my iPhone, didn't work out quite as planned (kept pressing in the wrong spot).  You get the sound though.  Strangely, not as loud as it goes past as I expected.
There's a much better (longer) video on the AMCN facebook page, I just can't get it to link.
AMCN
Posted by Brad The Bike Boy at 5:03 AM

Marvelous bike to have run at tremendous speeds. My father has always been a bike enthusiast. He sure would've loved seeing it. :)
- TheCycleExchange.com